We were browsing the aisles of the thrift store, Naia in on my back, looking for something or other. And she grabbed it. She reached out and took a hold of the China doll and would. not. let. go. For $2 we brought her home but when I stripped her down to launder her dress, Zach noticed that her little China foot was broken. Sharp edges are no good for a wee girl to play with. 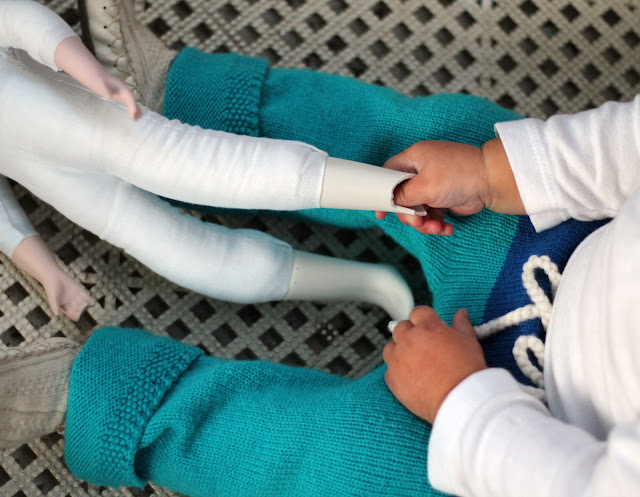 Not to fear, Dr. Brother is here... Zach whipped out his medical kit (a holiday gift from 2011) and went right to work. 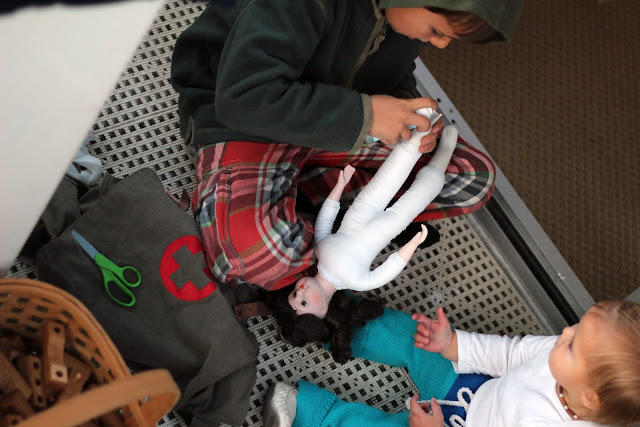 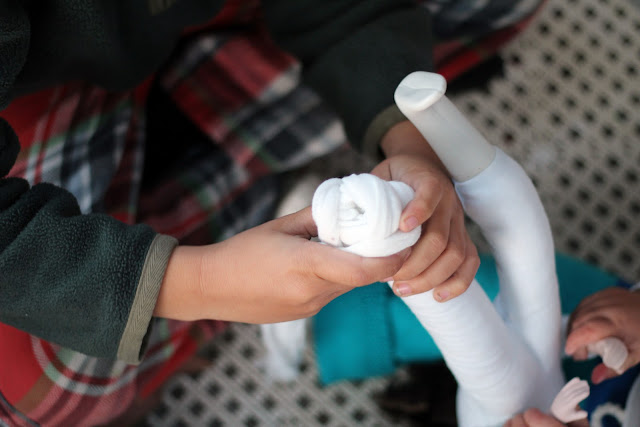 Naia looked on seriously, putting her trust in big brother to do the right thing. The China doll  got the full treatment, getting disinfected,  patched up, and set in a baby sock cast. And Naia took her back with a sweet kiss. 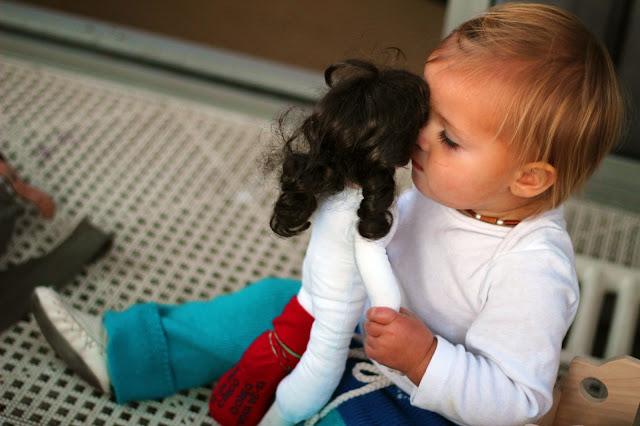 But our tale doesn't end there. Zach told me that he would really love to have a China doll too. He said that there was a pile of them at the thrift store and he scraped together the $2 from his vaults of coins and begged me to take him back to pick one out. Of course, yes, let's do that.

It seemed so simple.

He pawed through that pile of forgotten China dolls at the thrift store and picked out the perfect one. She had no broken bits, golden hair, blue eyes,and was ready for a new home. He cradled her in his arms, deciding that her name would be Mary (and that until Naia could decide otherwise hers could be Laura... as in the sisters from the Little House books) and we walked to check out.

That's when I heard the voice. It was slow motion, like a bad dream. I could almost see the words traveling in the air, moving towards my boy but I couldn't stop them.

"What's that boy doing with a doll? Boys don't play with dolls!"

This was not said under her breath. It wasn't said to her friend. The older woman in the red coat looked my boy and I in the eye and out of the clear blue spit her ignorant venom at us directly, loud and clear.

Here's where you need to know something about me. I am a bitch. Even in circumstances less heated than this, I tend to default to biting, bitchy, and blunt with a side of sarcastic when appropriate. But I had these two little people with me. I am the example of how to handle conflict. I was very conscious of this. It took every cell in my body not to verbally slice this woman open.

"Of course boys can play with dolls!" I said sharply looking her dead in the eye with a very serious mama bear look.

And yet she continued.

"Sure but boys can't play with GIRL baby dolls. That doll is a girl, what's he doing with a girl doll?"

Now my old friend Doug L. gave me the most delicious comeback after the fact via Facebook.
"You should have let her know that it was actually a boy doll. A boy doll with gender identification issues that likes to dress in drag." Boy I wish he was sitting on my shoulder whispering in my ear.

"Excuse me ma'am, my boy can play with whatever he wants. All boys can. And I don't believe we asked for your opinion on the matter."

And I whisked our family to the cash register. I didn't say anything particularly witty or profound. I just wanted to shut her up. But I looked at my boy and I could see the damage was done. He cheeks were flushed. His eyes revealed the hurt. This boy wears his heart on his sleeve.

We talked about it of course. Oh we talked and talked and talked. And I listened a whole lot too. And more than anything we hugged. A lot. For me it was like someone shot a poison arrow into him and there was no way to remove it. In an instant, with a phrase, he was changed.

I wish that was the end of the story, too.

He plucked up later that day with lots of loving from my husband and me. He was happily playing with his new doll at home, making plans, creating a little bed from a Clementine box. I went up to the laundry room to change the loads out. Doug was making dinner with the two kids happily sat on the floor playing with their China dolls Laura and Mary.

I heard the howl from the laundry room. Tears and screams and sobs. Thinking it might just be some pre-bed time witching hour drama I didn't rush down. But I saw he was waving his arms from the cockpit, and cradling that China doll with all his might.

Between the sobs the story came out. Naia, in a fit of toddler enthusiasm, bashed her China doll into his. Mary's face cracked and there was a hole in her cheek. No, no, nooooo. 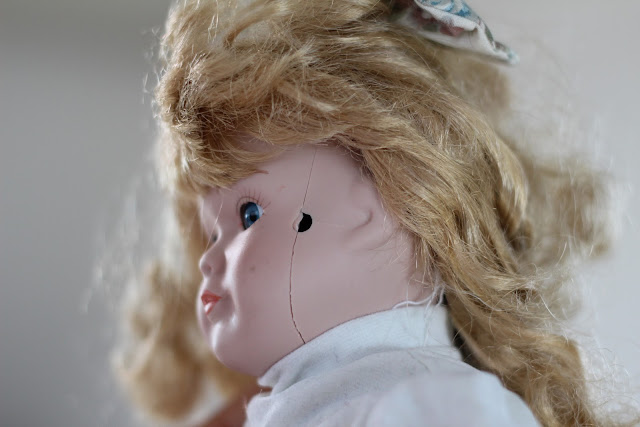 "Dolly! Dolly! Dolly sad," she pranced around in circles chirping. Not a worry in the world.

The rest of that night was a blur. Again, lots of holding and hugging and listening. But that boy, he amazes me. He really does. After an evening of mourning the sharp words and the cracked doll he bounced back with the delicious resilience of youth that we old folks tend to lose. 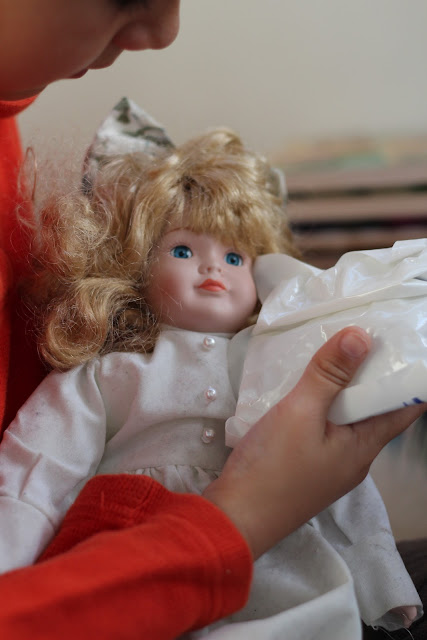 (an ice pack for Mary was all his idea)
"I have a great idea mama! Why don't we sew a Batman suit for Mary? That way her cracks will be covered by the bat mask and she can have cool costume too! She's going to look so cool!"

So we're working on the costume (though I may resort to etsy, doll clothes are not in my skill set yet). And we're keeping the China dolls away from the toddler. And we're moving on. We live, we learn, we hug and hold, and we get back up and move forward. But so help this woman if I ever catch her out and about when I am not with my kids.
at 9:38 AM