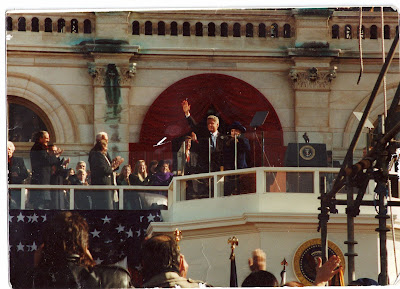 I am listening from the warmth and comfort of our boat, just 30 miles from the action in DC, to the ramp up of inauguration morning events. There is just NO way I would go down in person. Too cold. Too crowded. All for an ant's eye view. Call me jaded. Call me an old fart. I prefer to call it SANE.

Once upon a time I was a freshman in college in Washington DC, it was the year Clinton first got elected. There was a lot of great energy back then too. I volunteered for the campaign, I was in Washington, I was young, so of course I wanted to go to the inauguration. I planned on going with the masses, along with my friend Angie, just happy to "be there", watching on the JumboTron with the other commoners.

But something happened. I overslept. Angie overslept. I called her in a panic, just an hour or so before the actual swearing in was supposed to happen. We wondered whether it was worth hustling down there, we would be SO far back, we may even be too late.

But being young and intrepid we hopped a taxi and zoomed to the Capitol. We were faced with massive security, crowds, vendors, and the hopeless looking prospect of not being able to see anything.

A vendor waved a piece of paper our way. Sturdy card stock, embossed calligraphy writing, and a gold seal of the President. It was a souvenir inaugural invitation, but it looked pretty darn official.

So we bought two, took a deep breath, and walked up without a care in the world to the security gate for ticket holders. We saw people holding tickets that looked a little larger than your average concert ticket and they were color coded, red, blue, grey and so on. The MP were doing the standard airport security checks. Scanning bags, frisking people, mostly checking that we were unarmed. But this crack security force didn't seem to care if we had a ticket or not.

We got through security and another MP asked to see our ticket. He was explaining the reds go here, and the blues over there, and so on. We held up our souvenirs and said, "We have personal invitations."

His eyes bugged. "Oh sorry ma'am. You're in the wrong place. I'll escort you up to the platform."

And up we went, wearing blue jeans and me in a thrifted army jacket (oy vay). We were seated on the platform just below where Clinton was being sworn in. We had Jack Nicholson and Jessie Jackson on one side of us and JFK Jr. with Daryl Hannah on the other side of us. We just tried to lay low and fit in, fearing we'd be found out. But nobody cared. We saw the whole thing so close you could count the curls on Chelsea's head.

I had A LOT of photos from the big day, most of which I have no ideas where they are now. But here is one. And know that this was a disposable camera, no zoom. We were THAT close.

I plan to be that close again, in the warmth and comfort of a friend's house, with my nose against her big screen TV.

Happy Inauguration everyone and YAY OBAMA!
at 8:18 AM

Email ThisBlogThis!Share to TwitterShare to FacebookShare to Pinterest
Labels: Obama

I loved the full story! Thanks for sharing that. And happy inauguration day!