HOUR 1: Oh look, the wind seems to be picking up. I should check the forecast and see what's coming. Ah yes, we're due for a bit of a blow. Time to pull the odds and ends that are laying in the cockpit inside so they don't get away.

HOUR 2: Wow it's really blowing like stink out there. Let's turn on the instruments and see how hard it's really blowing compared to the forecast. Whoa did you feel that gust? "Hey mommy it feels like the boat is surfing." Baby coos. Lunch is made while bracing against the counter. 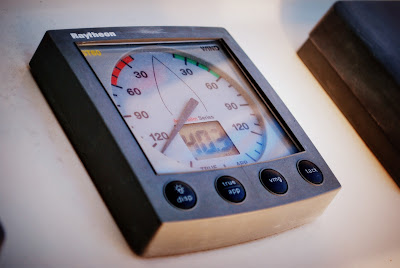 (That's 40 knots sustained - which is 46 miles per hour. The gusts were higher, but not something I was willing to stand out and catch with a camera on the wind instrument!)
HOUR 3: I can't believe it's still blowing just as hard. In fact I think it's picked up a bit. Let's carefully head out on the dock and make sure our neighbor's boats are ok. Pop baby in the Ergo. Pop life jacket on to the boy. Grab camera and head out. Of course other neighbors are out too, securing run away canvas and checking dock lines. 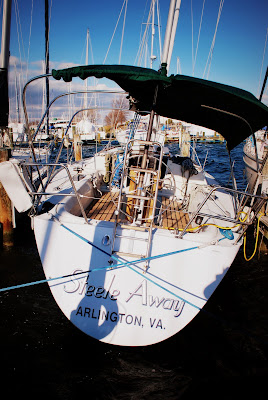 (That bimini was a goner.) 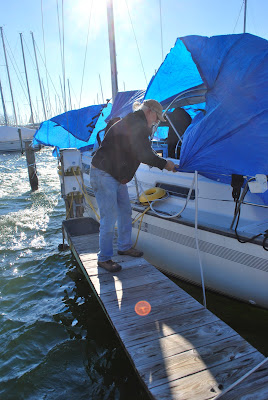 (Careful John! Those fingers piers wobble something fierce in a blow.) 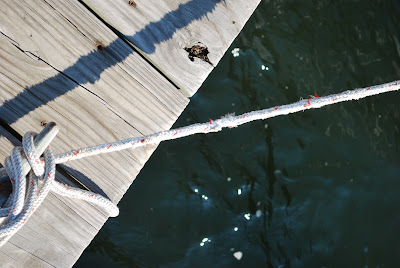 (Chafed, undersized line. Not good.)
We marvel at the waves crashing around our normally very protected dock. 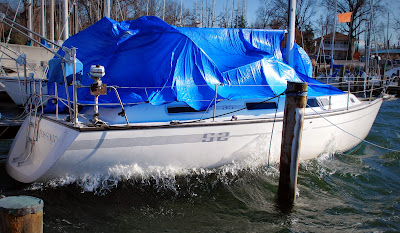 HOUR 4: Ok, now my brain hurts. Can it really still be blowing and gusting. We're at the slip and I feel fatigued. Baby is rolling on the bed during diaper changes and she can't roll over yet. Boy is getting whiney. Mama is getting whiney. 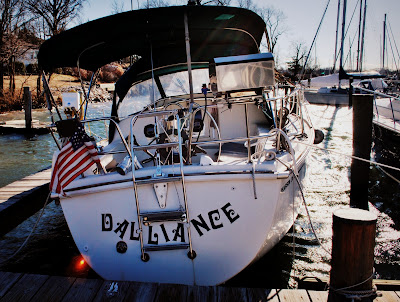 (Our neighbor R was happy to be at work during most of the storm since her boat was leaning pretty hard.)
HOUR 5: We head off the boat for a walk. Land feels wobbly after many hours aboard a rolling boat. Zach plays in the wind, arms outstretched, hair straight up. Then I see the large limbs on the grass. And I look up at the loose ones in the trees. Maybe this isn't such a safe idea. Back to the boat. 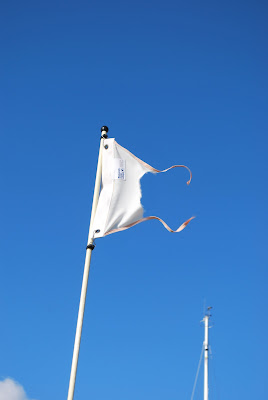 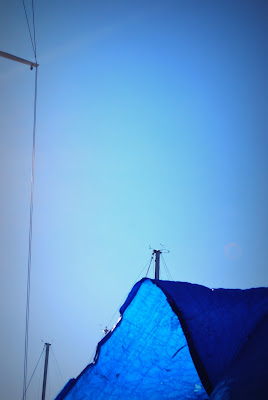 (Tarp on the loose.)
HOUR 6: Ok wind, you win. You're very tough. You're very powerful. We get it. Can we please have a break now? We hear something we forgot to put away bang on deck and trip off the lifelines. Bye bye whatever that was, you belong to King Neptune now. Doug comes home from work and states the obvious, "Wow it's really blowing in here." He suggests dinner out. We all cheer. Life in the restaurant seems so normal. Don't these people have houses that buck and roll in wind storms? Why are we the only ones walking with a stagger? 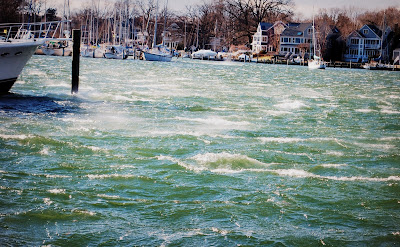 (Before...)
HOUR 7: We give up. Laying in bed we hear every whoosh, groan, bang, and screech. Sleep is pointless. Hours later in the pre-dawn glow, the wind finally simmers down like a drunk who's been out on an all night binge and finally folds. Sober as can be we all wake up with wind hangovers and appreciate the stillness. 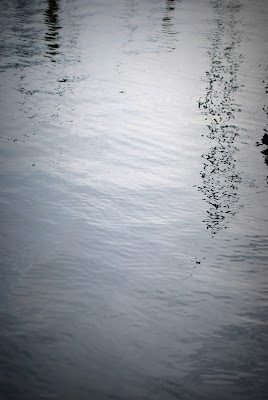 Wow...no fun! You need a land lubber friend who will let you crash in times like that!

You Cat sailors are so soft... ;)
Glad to hear you weathered the storm ok. Maybe next Spring you can be somewhere with less volatile weather...

whew that made me feel distressed reading.

You made me giggle with your comment about you being the only ones with the staggers! Jacinta

Gosh, from now on, when there is a big wind storm, I will think of you. love, Beth

Ooh, I'm so glad we missed this!