Ok, so I told a little white lie. But I KNEW he could do it. They said kids had to be 7 and up to participate in this 3+ hour homeschool sailing field trip aboard the Schooner Sultana. So I said he was already 6 and that I was sure he could keep up with the big kids and handle the trip just fine. And although he looked so obvioulsy little next to many of the kiddos (who were 8 at the youngest in our group) he showed them he was a salty dog. 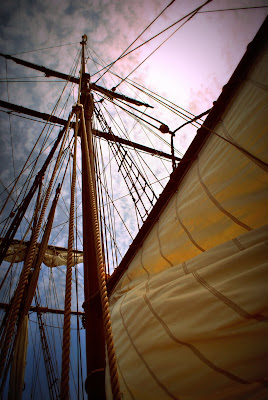 Sultana is a replica of the smallest ship ever to serve the Bristish Royal Navy. At 51 feet stem to stern she's a meticulous replica of the ship that plied the waters of the east coast from 1768-1772. The ship's mission is to spread knowledge of and passion for our local history and ecology. 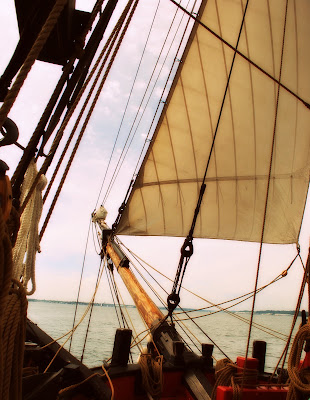 Passion? Check. The kid was on could nine the entire time. We've been on some historic ships before, but to be on one actually moving under sail... and get a chance to steer the ship? Nirvana. 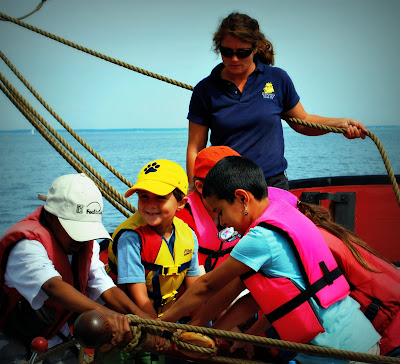 (It took 6 kids to move the enornous tiller under the Captain's watchful eye. They practice aiming for landmarks and making sharp turns as a team.)
Zach claims aside from steering the ship and getting to witness "a real cannon firing", his favorite part was going below decks and checking out "the old timey stuff." He and the other kids were duly impressed by the rusty old tools displayed on the table. Then they all paled when they were told these were the ship's medical supplies and given a graphic demonstration of how they were used. Gulp. 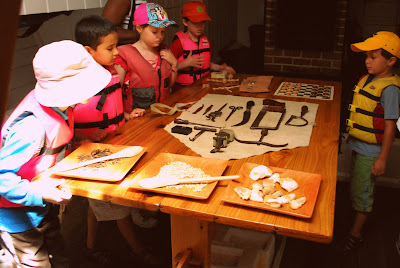 (The crew gave a demo of how an infected hand would be amputated using a screw tourniquet, some scalpels, and large knife, a bone saw, and a hot poker to soder the wound shut.)
Knowledge? Check. He got some and gave some too. Along with absorbing the fascinating tales and history of life at sea in the 1700's, he showed those big kids a thing or two about boats. He was aglow when he was the only one who knew the answers to questions like what are these numbers on the chart ("They show how deep the water is.") 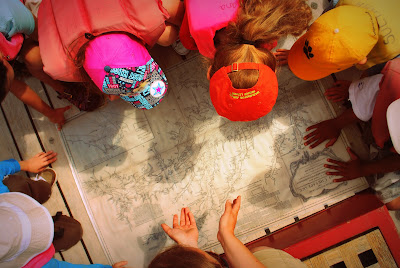 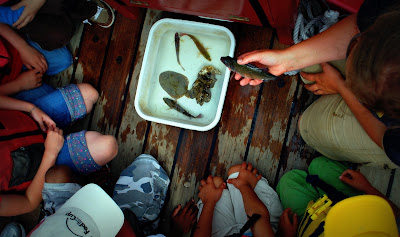 Who, indeed! I'm glad he got to be part of such an amazing experience!

This is so cool!

Thanks so much for posting this. I'm going to see about organizing a trip for my homeschool group!

Can I please just move in with you guys and be homeschooled there? I am amazed by all of the cool trips you have been doing lately.

What an experience! That is just too cool! Congrats, Zach! Way to go!

DimSum - I've said it before, but short of travelling full time -- the Washington DC metro area is truly the best spot in the USA to homeschool. I don't even post half the cool things we get to see and do. And most are cheap to free.