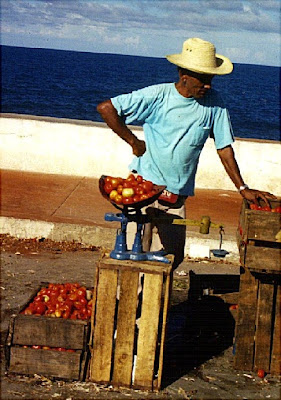 I was all about that scale. I couldn't believe that I was in a market in the year 2002 and someone was actually using a scale like that. Not to be cute or earthy, but because that was the scale he had. I was really after a photograph of the scale, but I didn't have a zoom capable of getting much closer, and he didn't seem the sort open for a chat and a close up. So I snapped it, quickly, from a distance while passing by. When I got back to the States months later and developed the film in Miami I was taken by the scene I captured, yes even with a grainy old pocket camera. The deep, true blue of the ocean. The unassuming beauty of the people. The industrious simplicity of the life on this island. After two months sailing and exploring this place, to me this photograph says Cuba.
at 10:32 AM

Email ThisBlogThis!Share to TwitterShare to FacebookShare to Pinterest
Labels: cruising, past travels

An awesome shot. I like the parallels between his using the scale because it was what he had, and the posting you are doing with the photos that you have. :)

Very nice shot and story. I would love to travel to Cuba. Please share more of that adventure.

I'm currently working in a house where that type of kitchen scale is used on a daily basis. The first time I saw it, I assumed it was an antique -- part of the decor. But, why not use it? It works. The guy in your photo knows that.

Great photo, great blog. I've been following for a while looking for inspiration on living without much 'stuff'; enjoying life; and living with a spirit of adventure. Thanks!

Joy - you're such a smart cookie! I never intended that parallel, but you're absolutely right!

Dim Sum - you and I need to have a night of red wine and travel tale swapping I think :)

Annon - Thank you for the kind words and dropping in. Please feel free to comment more, I love hearing what people have to say. I like having a conversation and not feeling so much like I am talking to myself :)

love that pic! you have a great eye.

Hopefully we'll be able to cruise to Cuba in a few years with the kids and they can meet E's family (some in Havana, most are in Holguín).