Oh my. I just glanced back at my past two posts and saw all I did was blather on about the weather. Oh dear. Snore. I guess we can blame it on the cabin fever.

I wanted to take another shot at sewing a dress for Naia. I made my first dress this past summer, and it worked out ok, though was a little rough around the edges. And I did this little dress too, which works nice for summer, but didn't seem very versatile for the colder months.  So I tried again. I would share the pattern with you, but it was a Frankenstein of like 3 different patterns/ online tutorials. 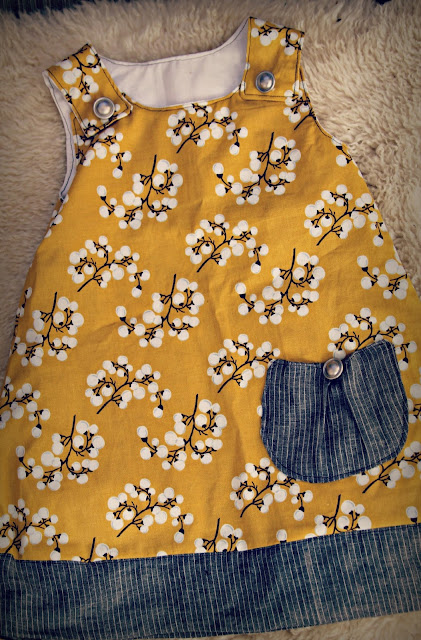 After finishing it most of the way I chickened out on completing it and let it sit for a while. Then when I finally got in the mood to finish it, I held it up to her and it was now too small. So I winged it with the bottom strip of grey to add length. I figure I can get funky and add another strip of some fabric when she gets taller.

The main hold up was the buttons. Not only was I unable to make a decision from my crazy jar of random buttons about which one to pick, but I have never used the button hole function on my sewing machine and the idea of screwing it up after working so hard on the dress froze me in a state of denial. So I did the noble thing. No I didn't practice button holes on scrap fabric to learn how to do it and build up the confidence to make them on the dress, I just added velcro instead. 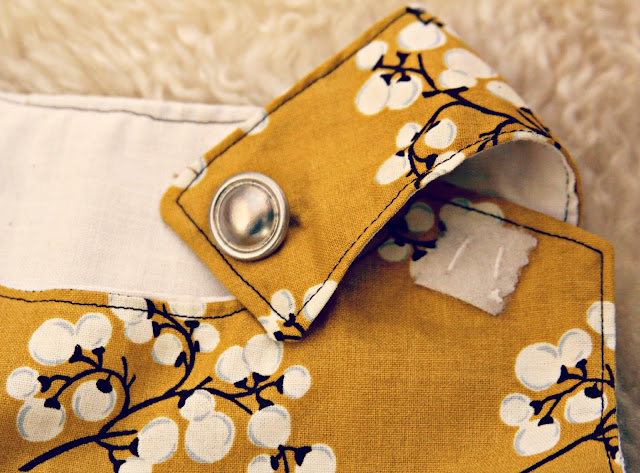 Besides it's easier for the wee girl to "do my big girl self" now this way. 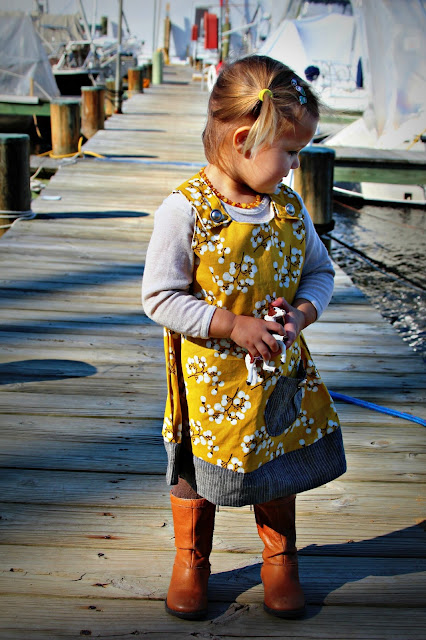 N's favorite feature is of course the pocket. She made it known to me in no uncertain terms that next time she would like 2 pockets. 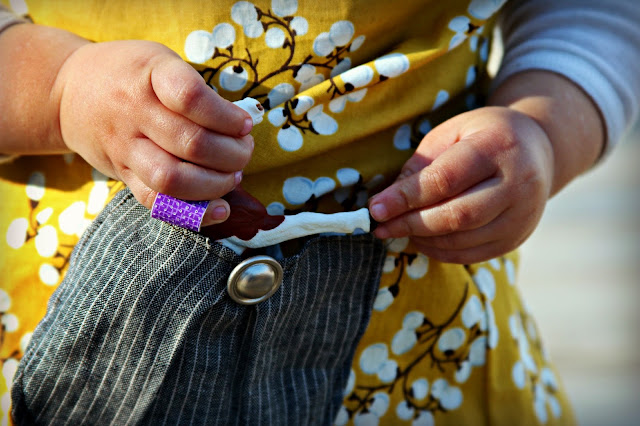 I put a matching button on the pocket because I royally messed up the pleat and the button covers my oops nicely. And I had three buttons so why not?

Now if it would just stay warm enough to wear a dress rather than 18 layers of wool and fleece... oh, whoops. No more complaining about the weather, I promise!

The dress is adorable as is the model! Well done on the creation of both. ;)

What a lovely dress, she looks so cute.
That pattern can also be made in fine courdaroy and lined with flanelette, to make a warm pinafore to go with sweaters, long sleeved shirts and tights.
Keep warm :)

She's such a cutie! And you did a fabulous job on that dress. I love the patterns, the buttons. Great job, mama!

Lovely! Your pictures are beautiful and so is your model :-) I will be returning often to look at this to see if I can recreate the same for my little 3+ girl. I love the idea of courdaroy and flannel...thanks for the idea.

Those things you view as 'mistakes?' They're 'design features.' I like the button on the pocket - a lovely accent that provides the finishing touch (who cares that it also happens to cover a less-than-perfect pleat?). And the Velcro under the buttons - brilliant for letting Miss Naia dress herself! I bet other moms will thank you a million times for THAT idea!

Next time you need to make something with buttons and button holes, see if you can incorporate something from another garment that already has the holes made! Best of all would be another set of straps. You never know what you can salvage and turn into the button up front of a dress, shirt or coat. The same goes for pockets. Just slap a ready made one on . I would also recommend trying out the button hole setting on some scrap fabric (double width with webbing in between will give the nicest finish) without the stress of trying to finish a garment, and you could well find yourself becoming a total button hole addict, putting buttons on everything you make.
Stay warm!
Clare