It was not a picture perfect sailing day. The wind was favorable, but not ideal. The seas were mellow, but choppy. We meandered along at an average pace. But something had changed.

When we left Annapolis we weren’t ready, but who really ever is? What we lacked in sea miles, we more than made up for in youthful enthusiasm. Alone on watch, in the wee hours, it hit me. This is our house. All of our stuff in the whole world is in this fiberglass tub. Everything, including my husband and my dog. If we were to flip, or hit something, or break something we wouldn’t even have a clean change of clothes let alone a roof over our heads. What the hell were we thinking?!

Somewhere off the coast of Cuba the alchemy of perspective overwhelmed me as walls of water enveloped us, then lifted us high enough to reach up and touch the menacing grey sky. Then suddenly the watery walls crowded in around us once again. Each minute seemed like an eternity. Behind us were uninhabited islands, in front of us unknown foreign ports. “What ifs” pecked at my brain, the wind taunted me with its wailing, and the sea bullied me from behind. I started to over analyze every creak, thud, and groan that came from the boat. Should I check on that, is that a normal sound, was that inside or on deck?

But then I stopped hearing things and started to listen. She was talking to me, reassuring me. Telling me everything would be just fine. Her words soothed me and I was able to tune out the elements.

“Remember?” she whispered. “Remember when we first met?”

I remembered. We were young and blinded by passion. When we stepped aboard it was love at first sight. We rushed in headfirst the way new lovers do. And she seduced us with her good looks and fast talk. Our first time out was a wild ride. It was blowing 30 knots, it was November. We were off-shore, screaming up the Gulf Stream. We had no business being out there in those conditions, but she charmed us into thinking all late season, off-shore passages went that smoothly. The first months aboard were full of discovery and plans and talk of things to come. But like any long term relationship, we fell into a routine. And the routine turned to a rut. Day after day, week after week, we grew to know each others sounds and movements, and rather than appreciate each other, we learned to tune each other out. We started taking each other for granted. We didn’t know where this relationship was going.

Until one clear autumn day when the light was golden and the air was crisp, a decision was made. We would run away together in a year. The next time that flock of geese makes their journey south, we’re going with them.

Preparations were made. We both prettied up and got in shape, and tried to make sure we’d be at our best when the time came.

The first few weeks were rough. Things broke, mistakes were made, blame was cast all around. I cursed the skies and resented the sea and wondered why I trusted our fates to her. But as the air warmed and the sun stayed out longer and the water cleared, we all settled down. The change of scenery breathed life into our old routine and adventure beckoned. We hosted new friends. We braved off the beaten path. We silently savored sunsets together in unknown waters.

And many miles later in the quiet of a dawn watch on this not-so-perfect passage between here and there I realized we were in synch. No more struggling to understand each other. No more testing how much the other could handle. No more awkward silences. The boat and I were finally a team. 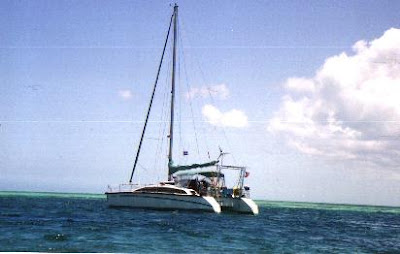 (Our first boat after the trip described above in 2002. The boat was called NESHAMAH which is a Hebrew word meaning "soul" , "breath of life", and "inspiration" - she was all of those to us.)

Email ThisBlogThis!Share to TwitterShare to FacebookShare to Pinterest
Labels: cruising

I have been thinking recently about what my house means to me as well. A house shapes who you are and who you become. This is a great time of year to be thankful and our abodes should be high on the list, thanks for reminding us.

what a great post!
i enjoyed reading of your adventures at sea and of what your home means to you. it is interesting to hear of your connection to the ocean and the sky, i love hearing of the places that others connect with in nature.